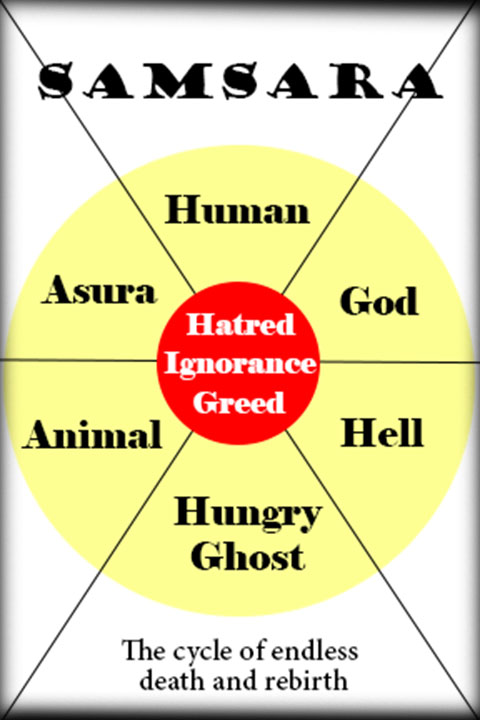 Link: The Cause of Suffering: Ignorance and Karma
Link: Introduction to Chart of Samsara

Samsara, the realm of birth and death. In Samsara, there are three distinct levels of existence. The highest is the Formless Realm, in which there are the greatest gods who have transcended the physical body, having mentality only. There are four heavens on this level.


The next level, the Form Realm, also, only consists of heavens. The gods in these eighteen heavens have a form, but they have gone beyond the greed and lust for the pleasures of the five senses. They have attained a state of very profound and sublime happiness that it is a result of their skill in meditative concentration. Their greed for the five senses has been eclipsed by means of the force of their concentration-power. This is just like when a boulder is placed on grass, the grass is temporarily unable to grow. In the same way, their meditative power and ability has temporarily suppressed their thirst for the pleasures of the five senses, but it is still latent. The only way it can be eliminated forever, is by means of prajna wisdom. The Sages, that is the Arhats and Bodhisattvas as mentioned in Chapter Five, attain permanent states of Enlightenment in which this greed is truly extinguished.


On the next level, the Realm of Sensual Desire, there are six heavens, the realms of Asuras, human beings, animals, ghosts, and the denizens of hell. The minds of all the beings in these states are dominated by the drive for sensual pleasures. Those in the heavens here enjoy an incredible happiness associated with the senses as a result of their practice of good karma in the past.


Those in the three lowest states, also known as the Three Evil Destinies, that is animals, ghosts, and denizens of the hell, undergo much suffering and difficulty.

As mentioned in the Introduction, the purpose of the Buddha’s teachings is to see that all states of existence in Samsara lack substantial realty. As it says in the Shurangama Sutra (Volume 7) they:

Come into being from false thoughts, and their subsequent karma comes from false thoughts. Within the wonderful perfection of the fundamental mind that is unconditioned, they are like strange flowers in space, for there is basically nothing to cling to. They are entirely vain and false, and they have no source or beginning.


The Wheel of Life


Basically, in Buddhism Samsara, the cycle of death and rebirth is being repeated within Gods, Asuras, Human beings, Animals, Ghosts and Hells.


All the gods in the Form Realm Heavens are without the sense of smell and taste, and they do not eat food, sleep, or have sexual desire. However, the desires for these things are still latent and once their heavenly life comes to an end, they can still return to any lower realm of existence in accordance with their karma. These desires are also latent in the gods in the Formless Heavens. The Third and Fourth Stage Arhats and the Bodhisattvas, because of prajna wisdom, have ended these desires at their origin, so they will never arise again.

Gods in the Desire Heavens still have desires connected with the five senses, including the desires for food, sleep and sex, with marriages as in the human realm. Yet the happiness they experience is much greater than that of the human realm. The human realm compared to even the lowest Desire Heaven is like a toilet pit. The gods in the first two Desire Heavens fulfill their sexual desire in the same way as those in the human realm. In the Suyama Heaven they fulfill it by holding hands. In the Tushita Heaven they fulfill it by smiling at each other, in the Bliss From Transformations Heaven, it is fulfilled by mutual gazing. And the Heaven of Self-Mastery Over Others’ Transformations it is fulfilled by merely glancing. All the heavens beginning with the Suyama Heaven and above do not have a sun or a moon. In those heavens, the bodies of these gods emit their own light.


Although asuras are an individual realm by themselves, they also can appear in both of the other good paths of gods and humans as well as in the three evil destinies of the hells, the ghosts and animals. In general, regardless of what path they are in, they like to pick fights and have bad tempers. They enjoy bossing others around and like to be supervisors, but they cannot stand being supervised by others. Among people, asuras can be good or bad. The good asuras include military officials and troops, and bad asuras are thieves, thugs, murderers and the like.

Asuras are unruly beings that love to fight. Their name means “ugly”. It also means “ungodly” because, although some asuras enjoy heavenly blessings, nonetheless, the lack authority in the heavens.

Shurangama Sutra has talked about the four categories of asuras in the three realms of existence. Asuras in the path of ghosts use their strength to protect the Dharma and can with spiritual penetrations travel through space. They are born from eggs and belong to the destiny of ghosts.

Those who have fallen from virtue and been expelled from the heavens dwell in places near the sun and moon. They are asuras born from wombs and belong to the destiny of humans.

There are also asura kings who support the world with a penetrating power and fearlessness. They vie for position with the Brahma Lord, the God Shakra, and the Four Heavenly Kings. These asuras come into being by transformation and belong to the destiny of gods.

Ananda, there is another, base category of asuras. Their minds dwell on the sea; they live submerged in underwater caves. During the day they roam the skies; at night they return to their watery realm. These asuras come into being because of moisture and belong to the destiny of animals.


All Buddhas become Buddhas in the human realm. The human realm presents the best state of existence for spiritual cultivation because it has a balance of good and bad. In the heavens life is too blissful to arouse concern over the problems of birth and death. In the three evil destinies (hells, animals, ghosts), intense suffering precludes any other awareness. One merely longs to escape the immediate agony, and is unable to consider the deeper significance of suffering as a universal condition of all the states of conditioned existence.


If you wish, you can enter the realms of existence mentioned above to try them out—put on a play—but you should not play around with the three remaining realms. If you try these out you may not be able to escape. It is said that after one life in a human body, 10,000 kalpas may pass before that form can be obtained again. Playing around with the three evil destinies can be very dangerous.


Eager animals feed on greed,
Never sated by a lot.

Because they make what is black white,
They don’t distinguish wrong from right.

There are billions of animals, an infinite variety—flying, crawling, swimming, and walking—on land, in the water and in the sky. Beings become animals as a result of one thing: greed. For them, no matter what it is, the more the better. Animals lack the ability to reason. They become muddled and ignorance envelops them so that they become totally oblivious to anything rational—even to the point that they are greedy to eat excrement.


The ghostly crew delights in hate,
Deluded by effects, confused about cause.

Their ignorance and upside-downness
grows greater each day, deeper each month.

Almost everyone has heard of ghosts, but not everyone believes in them. Ghosts are masses of yin energy which have shadow and no form, or form and no shadow. There are as many different kinds of ghosts as there are grains of sand in the Ganges River. Some ghosts are affluent and reign as kings over the ghost realm; some ghosts are poverty stricken and devoid of authority—it is often the poor ghosts who bother people. If you want to investigate ghosts in detail, work hard at your spiritual cultivation, open the Five Eyes and Six Spiritual Penetrations, and then explore for yourself.


The hells’ anxiety and suffering
Is devoid of doors yet one bores right in.

Giving rise to delusion deeds are done.
The retribution is born in due accord.

Anyone who would like to take a vacation in the hells can do so at any time at all. I can guarantee that. But the hells are a miserable place. Lamentation plants the seeds for hells; happiness plants the seeds for heavens. Unlike jails, the hells, although man-made by people who commit offenses, haven’t any doors. However, if you are due to go to the hells, when you arrive it is just as if a door opened, because you find yourself worming and boring in where there was no entrance. 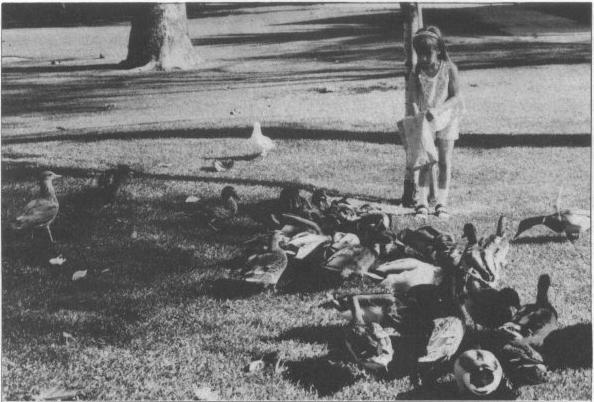