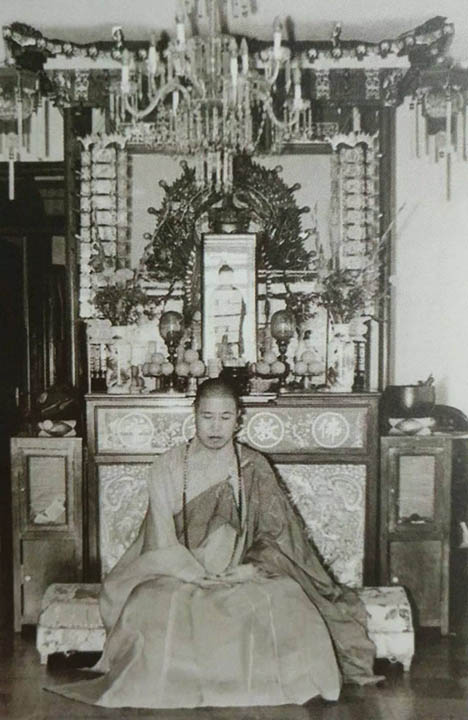 The causes and conditions for establishing the City of Ten Thousand Buddhas were determined limitless eons ago. It was determined then that the Buddhadharma would be propagated to the west, and when that time came, the City of Ten Thousand Buddhas would appear. However, the City did not make its appearance by falling down from the heavens or by welling forth from the earth. Rather, it was built by people. Seventy to eighty buildings were constructed here. How did these buildings come into being?

Originally a large state hospital complex built by the California government was located on this site. Its construction started in the 1930s, and all of its buildings and facilities were first rate. There were over 70 large buildings and 200 rooms of various size....... However, in the mid-1970s, California suffered a drought of unprecedented severity.
這個地方，在一九三零年代開始啟建，
原本是美國加州政府興建的公立療養院，
規模相當宏大，
所有的建築物和內部設備都是一流的。
大建築物有七十餘座，小大房間兩千餘間……。
但是 ------
一九七零年代中期，
加州遭受到史無前例的大旱災……

It was possible that the hospital did not have any funds left after the completion of its
construction. In addition, as there were around 6,000 patients and hospital workers living here, the water consumption must have been quite high and other expenses must have been considerable as well. In addition, water is very scarce in this area, and there were a lot of nearby orchards and vineyards that also needed water. Indeed, the owners of neighboring orchards often brought their grievances to the local government, voicing their opposition against a public institution's competition with the local people for water. This was another reason that the hospital was forced to close. Since there was no water, people could not even cook their meals. Two of the Five Elements, water and fire, were unable to provide mutual aid - the water could not help the fire, and the fire could not help the water. Similarly, people could not help the water, and the water could not help people. Under these circumstances, the government decided to sell the property.
所以房子造好了，或者也沒有錢了，
加上從前這裡有病人和工作人員約六千人，
耗水量很大，這一切的開銷還了得！
這個地方的水源非常困難，
附近地區盡是果園，處處需要水，
所以果園園主常向政府訴怨，
反對公家的事業和民間爭水，
這也是不得不闗閉的大原因。
因為沒有水，所以也不能開伙了，
水火不能濟濟 ----
水不幫助火了，火也不能幫助水了；
人不能幫助水了，水也不能幫助人了。
在這個情形之下，政府就要把它賣了……

At that time, even though the Gold Mountain Monastery in San Francisco, was located in a three-story building with 18,000 square feet of space, it was still too small to accommodate the crowds that came to attend Dharma assemblies. One of my disciples, after leaving the home-life, wanted to do some work for his teacher. So he went everywhere to look at properties. On his way back to San Francisco from a trip up north, he passed by this hospital. When he saw that it was for sale, he asked me to go and take a look. So I went with 5 disciples to see the place. When I saw the property, I thought it was a very fine place with so many buildings. But the price was so high, what could we do? Even a millionaire monk would not be able to afford it, not to mention a poor monk like myself.
So we didn't even dare to think about it, much less to buy it!
那時在舊金山的金山寺雖然有三層樓，
面積共有一萬八千平方呎，
可是法會的時候，人一多起來，也不夠用。
我有個徒弟，出家之後，想幫師父做點事，
就各處去找地方。他從北邊回來，路經這所醫院，
一看這個地方要出賣，就請我去看看。
我就帶五個弟子去看，一看！這麼好的地方，
這麼多房子，價錢這麼貴，怎麼辦呢？
別說我一個窮和尚，就是一個萬金和尚也買不起，
所以連想也不敢想，更不要說買啊！

After half a year, someone came and negotiated with me, suggesting that I purchase the hospital as an investment. However, I didn't have enough funds, let alone capital for investment. Despite this, I still took 18 people to take a look at the place again. I first looked at the clinic building located at the front of the property. When i saw the building, I thought "After spending so much money, they could not even manage to finish constructing the clinic." I then turn to the others and said, "We are all disciples of the Buddhas, and we should do something on behalf of Buddhism. If we fail to do so, we should be greatly ashamed of ourselves. We will not be able to hold up our heads before the world. Therefore, today, I am making a vow to buy the entire property with all its buildings and land!"
這樣過了半年，又來了一個人和我商量，
說可以投資作生意，可是我也沒有本錢。
雖然如此，我還是和十八個人到那個地方，
先看位於前面的一棟醫院，看了，心也就動了，
心想：「單單造這棟醫院也造不出來！」
所以我就和一起去的十八個弟子提起，
我說：「我們都是佛教徒，應該為佛教徒做點事情，
如果我們沒有為佛教徒做事情，
應該生大慚愧，沒有什麼面目見世間人；
所以今天我要發願，要把所有的房子和土地買下來！」

Everyone, just think about this, I am a poor monk and do not have very rich lay supporters. Yet, incredibly, I managed to accomplish something that no one else in the world could do - the founding of the City of Ten Thousand Buddhas. In this Dharma-ending Age, when a Way-place of this scale emerged from the ground, it was the culmination of the causes and conditions that would enable a Way-place to be readily available for us.
各位想一想，以我這一個窮和尚來講，
也沒有什麼很有錢的護法，
居然能把世界人所不能做的事情做了
---- 將萬佛城建立起來。
在這麼一個末法時代，
能有這麼樣一個大的道場從地湧出，
可以說是天造地設的，
給我們預備一座現成的道場。

Therefore, it is really inconceivable that we could easily build this big Way-place, and also be in the process of establishing a university where we can train students with a genuine sense of righteousness, morality and humaneness! If we examine this inconceivable state, how could we have accomplished such a feat without the Buddhas of the ten directions and three periods of time helping us to do the great work of a Buddha? So we should understand that the Buddhas manifested such a large Way-place so that everyone could come here to cultivate diligently.
於是我們到這兒，
可以很容易地成就這一座大的道場，
並且正在辦一所大學，
造就世界真正有良心道德，
知道怎麼樣做人的這種人，
這真是不可思議！
我們以這個不可思議的境界來觀察觀察，
這要不是十方三世一切諸佛
來幫著我們大做佛事，
怎麼能有這樣的成就？
所以大家應該明白，
這就是佛示現這麼大一個道場，
讓我們所有的人在這兒用功修行。 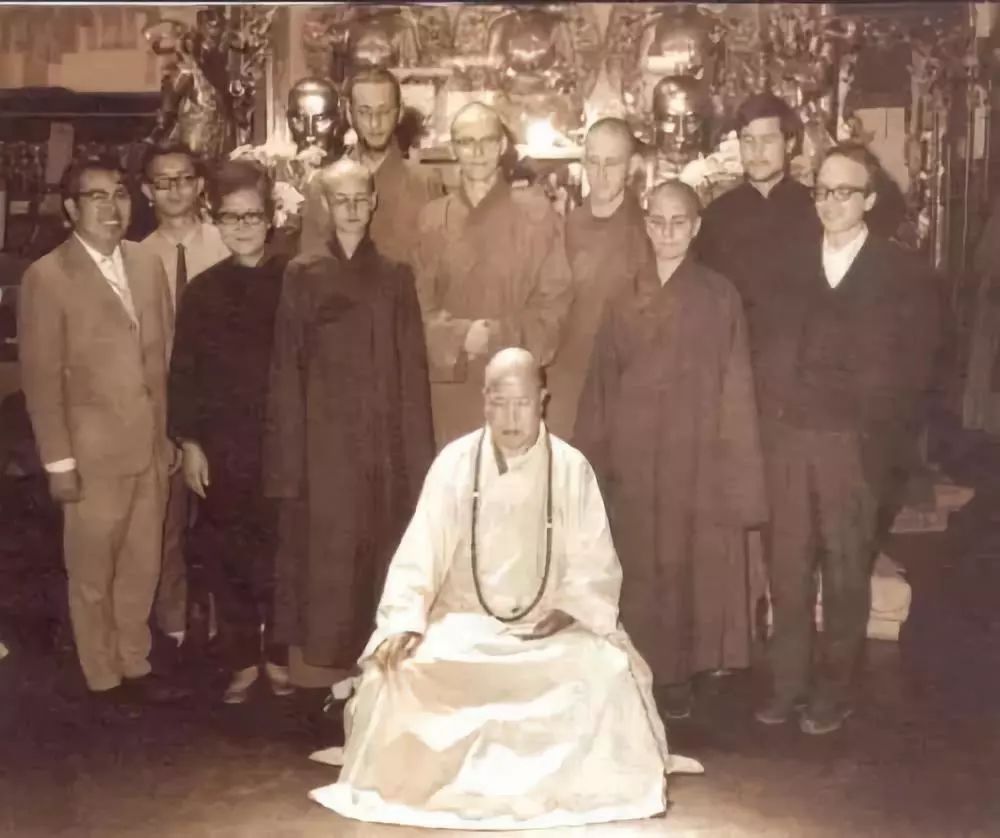 If you want to help Buddhism, you have to actually propagate the Buddhadharma, set a good
example for others, maintain good deportment, keep the five precepts, and save living beings by means of the four limitless minds of kindness, compassion, joy, and giving. Our conduct should be based upon the Six Guiding Principles of not fighting, not pursuing personal advantage, and not lying. If we practice the Buddhadharma according to these guidelines, then the Proper Dharma will be present wherever we are. The decline of the Dharma will not manifest.
若想對佛法有所幫助，就要真正弘提佛法，
以身作則，注意四大威儀，持守五戒，
用慈悲喜捨四無量心來度眾生，
用不爭、不貪、不求、不自私、不自利、不妄語
這六大宗旨，為律己的準繩。
用這樣的法則去推行佛法，
無論在什麼時候都是正法，不會有末法出現。